I suppose it's better with a pillow 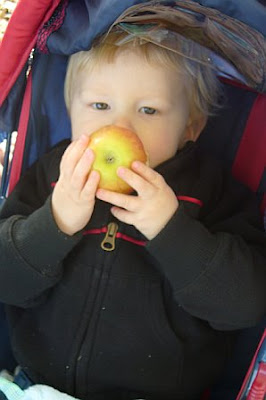 Oh boy, are we in for it.
Saturday was a fabulous day, although Sasha exhibited his toddlerness by refusing almost all food. Now, would he show/tell me what he wanted (Usually done by taking me by the hand and then pointing and say “Mama, dat.”)? No. He just refused food.
That is, except apples and raisins. We found the trick to fruit is find nice ripe fruit, wash it, start it, and then hand it to him. The boy loves to eat his apples and will almost finish a whole one himself. I think he’d eat the whole thing if it didn’t mean having to eat that last bit of peel that was keeping his hands from getting sticky.
I know it’s mostly the novelty of something new, but whatever. He’s eating.
He’ll also eat gnocchi with bell pepper sauce and buttered raviolis. And that’s pretty much it. I hate the toddler pickiness. Thankfully, I load up on gnocchi and ravioli at Whole Foods and so have a VERY wide assortment of fillings.
More toddlerness exhibited when we were out running errands. Errands that had to be run. We were out of milk, eggs, grout…but he decided he wished to be allowed to run free. No basket. No holding hands. And definitely no leash. So tantrums were thrown every few minutes.
Yes, we were THOSE parents. The ones in the store who’s child has laid down on the floor kicking and screaming.
What kills me? He folds his taggie and lays it down for his head before throwing himself to the floor.
Posted by Becoming Mommy
Labels: Baby, tantrums

I LOLed at the image of him laying his taggie down before throwing himself on the floor. Hey, if you are going to have a tantrum, might as well be comfortable!

As you read, the toddler tantrums and pickiness are driving me crazy too. I keep repeating to myself that it's just a phase and she'll grow out of it... eventually.

That's great that he loves a healthy food!