The weekend that included our cookout/Sasha’s little family birthday party went off fairly hitchless.
There was enough food. Sasha had just woken up from a 2 ½ hour nap when it started and was pleasant. And no one said anything regrettable.
There were even limited comments on the food. I do not cook traditional Southern style and I try fairly hard to keep to more natural, less processed foods. Which has often lead to comments. However, the only thing this time was about the soda, which I did not make, so don’t care so much about. All natural soda isn’t Fanta and that’s all there is. We also had water and apple juice so no one needed to drink them.
We had grilled veggies, a black bean salad, two types of fruit salad, hot dogs, steak sandwiches (made w/rib eye cut in the style of shabushabu), macaroni and cheese, and a few other options. 2 types of pie were for desert, and for anyone not liking pie—rainbow sherbet.
I intentionally overfeed people.
I know how things work. And how we always end up with a bunch of people attending who said they definitely weren’t coming or “guests” they’ve decided to bring with them who weren’t invited or expected. This is something I wish would change, but I don’t see it happening. So I will continue to plan to overfeed and hope I have enough but not ridiculously too much food. And it’s a good thing too because we had lots of unexpected people.
Also, some people were between 1 and 2 hours late, which is a bit annoying, but I’ve learned and we didn’t wait for anyone.
Sasha enjoyed his gifts.
Eventually.
I really wish other parents would reign in their children and allow the birthday child to be the first to play with his gifts and to unwrap them himself.
Instead, poor Sasha mostly found himself pushed aside by his cousins. He’s a good boy though and reigned in any toddler temper. I knew he was frustrated and annoyed, though. It was the Head Rub that tipped me off. When he starts getting to the end of his rope, he starts rubbing his hair. And the more annoyed he is, the further down his face he rubs.
He was down to his mouth when most people left.
I kept a few things packaged so that he could be the first to play with them after people left. 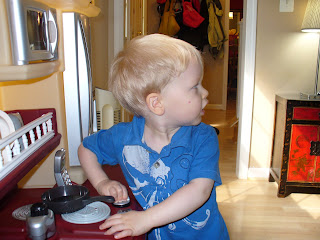 Playing with his brand-new kitchen for just a minute. 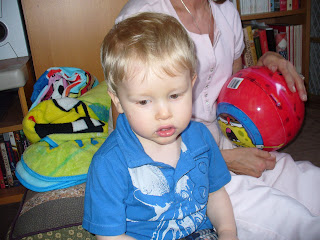 Starting to get upset. 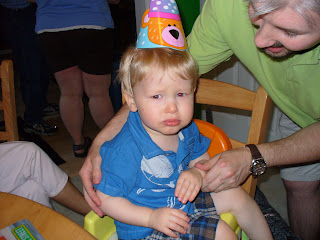 No one should be this unhappy on their birthday. 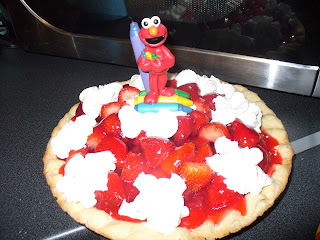 The pie he shoved into his mouth with his hands.

In the future, I think we'll be forgoing the "small family party" for just a day where Hubby and I take Sasha to do stuff he loves and let him eat his favorite foods all day and bend the rule about mealtime being at the table. I think he'd be much happier
.
Posted by Becoming Mommy
Labels: Baby, family, food, parties

I inevitably end up with some people showing up who I didn't think were coming and then others who fail to show up after telling me they were coming. I hate that.

I figured out how to deal with the other kids wanting in on the presents... We now wait to open them until everyone leaves. It also helps keep the party from going on too long, because opening the presents can take forever. I just had to warn everyone ahead of time so no one was expecting it.

It sounds like you are getting a good handle on how to deal with family, plan the parties and knowing your own kid! Way to go!