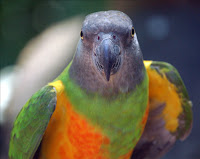 Our little Parrot.
No, my little hobbled Senegal, my former pet, has not returned to me (he’s happy where he is, and the Hound would eat him anyway).
Sasha has taken to instantly copying “interesting phrases” he hears…be it from us, from television, from radio…it doesn’t matter. Thankfully, we’ve been taking careful watch to screen language (to the point our censorship has us yelling out some pretty funny things).
He’s getting to understand what a lot of them mean pretty quickly, too, and has been adding them to his own vocabulary.
His favorite of the moment? “Oh, man!”
As in…
“Oh, man…I pooped.”
“Oh, man…I dropped milk.”
“Oh, man…Kerrygirl took Hound’s toy and stepped on my toe. Kerrygirl’s bad.” *
It’s kind of amusing to see a little baby get worked up about something, and rather than crying, rub his hair and start complaining with “Oh, man….!” He seems to have it down that it’s what you say when something is upsetting or frustrating, because that’s when he uses it.
Mostly.
I’ve also seen him practicing new inflections and voices out with words and phrases he knows…frequently cracking himself up.
*Sasha’s complaints about the dogs behavior appear to be mostly imaginings. Yes, they take each other’s toys. His toes do get stepped on. But the peculiarity or these complaints is that they a) occur when the dogs aren’t home; b) occur when Sasha isn’t home and the dogs are (so how would he know what they are doing); or c) these “bad behaviors” are being done to imaginary folks like Elmo, Grover, or Big Bird. I’m not concerned about it at all, because the “offenses” aren’t actual behavioral issues, just dogs being dogs. But he’s so adamant that they be punished for his imagined offenses that it’s kind of funny.
Posted by Becoming Mommy
Labels: Baby, Beasties news, development, talking

I love when they do that. I'm not all that fond of Alexis' current "What the heck?" but "Oh, man" is freakin' adorable.

Very cute! Way better than my daughter parroting our saying GD as we pound our fist on something. (She did this twice in front of my very religious MIL while I was in the hospital with #2. Londo tried to convince her that she must have been saying something that sounded like GD. We are working on it, but it's not easy. I'm going to try to switch to "oh man" cause that sounds way better!