From the 9th Circle


And despite this, I do the little things to stave off global warming we that we are all asked to do by the Gore-ites.

Which I've begun to wonder if they have it a little wrong...if it's not actually more like the Day After Tomorrow.

Think of it...the most snow in 100 years (with more on the way) and unusually cold temperatures. It's not much like the tropical climate we've been promised by the global warming folks. If so, I might be happier.

As it is, the snow plows decided to wait till today to clear our street. Which incidentally, was already cleared by the residents of this street. Instead, he just plowed us in with snow from the neighboring cul-de-sac.

Work is closed, but I have to work anyway. Meaning I can't get half of anything done till the night-owl contigent starts working at after 10pm. So I now work 24 hours a day instead of just 10. Not that I'm that effective because I need materials I can't get till the office reopens.

Maybe...just maybe I'd like snowdays more if I only could have them mean this: 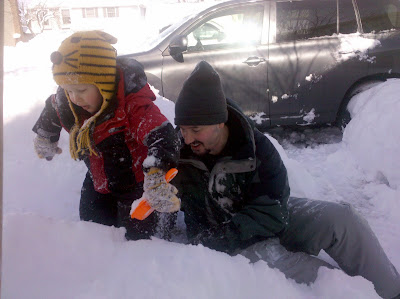