(Toy) Weapons Are A Great Thing 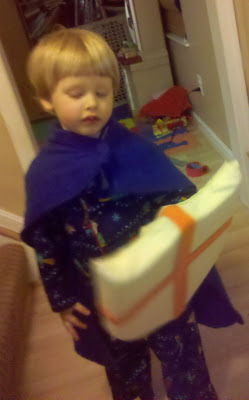 I think psychologists must be wrong. At least some of them.
I have often heard that allowing children to see violence, even cartoon violence, makes kids violent. Heartless. Insensitive. Sociopathic.
While there may be some correlation between violent imagery and development in some children, I just don’t find a cause and effect. If there were, I’d probably have a little demon on my hands. I don’t.
Sasha is fascinated by the idea of weapons. He has several swords, guns, shields, and even a truncheon and a piece of plastic he decided was a bazooka. They are all fake and harmless. The swords are soft foam. The only gun that actually shoots anything is a purple water pistol. He thinks that the proper phrasing is that you “Pew” the gun, rather than shoot.
He also likes stories where weaponry and violence occur. We’ve made sure to select that they not be *too* bad and make bad and good quite clear: The Legends of Arthur, Greek mythology, Robin Hood for the older tales and Superman and other great superheroes for the modern ones.

He adores them. Superman has helped Perseus on several adventures he’s created and I love it. Pirates nearly always figure in and sometimes they are good; sometimes they are bad. He has them as the ultimate self-serving opportunists. They are his ‘grey.’ While they might do the right thing, it won’t be for the right reasons. His heroes are all motivated by the greater good.
I think he has learned from the tales and knows right from wrong quite well.
But he has not really been desensitized. At all.
When a Humane Society or ASPCA commercial comes on, he cries. He cries for all the puppies and kitties who need Mommies to take care of them.
When Superman is falling to the power of kryptonite, he cries and implores Superman to get better and get away from the poison rock.
And when I read him Peter Rabbit? Well, he only just realized what was meant by “He was put into a pie by Mrs. McGregor.” And. He cried. He doesn’t seem to have a problem with the idea of eating fish and birds. He knows about that and still heartily eats them. He has problems when it comes to mammals. He just thinks it’s wrong.
This child is not desensitized by seeing Errol Flynn stab people or hearing about Medusa’s beheading. He just learned about good, evil, and self-defense.
Posted by Becoming Mommy
Labels: development, education

I love the has Superman with Perseus. I'll bet that would make a good comic! And the pirates as his grey? That's how I always was too.

In spite of what some say, I think the weapons and superheros and stories like that can be very helpful to kids for working out exactly what you say: good, evil, self-defense.