I picked up Sasha at his Grandma's (Hubby, as usual, was preoccupied with matters of a robotic nature) when she just offhandedly mentioned she thought Sasha's cranium was abnormally large.
It didn't bother me in the slightest, because that's not news to me. If he'd had a little--or even average--sized head, I wouldn't have a nasty c-section scar. But his head fits his body, so it's not worth giving a second thought
But I have noticed that there has been undue attention lately from family, friends, and general strangers on Sasha's size. Yes, he's a 9m.o. who exceeds 20lbs while being fairly lean for a baby. And that is important to me for a few reasons:
1. I need to know what size clothes to buy him
2. I need to know when he's reached the size limit on his baby gear (carseats,etc.)
3. I can confidently know he's going to need more than one jar of that Stage 3 baby food.
4. I and his doctor can accurately figure out how much a dose of any medication should be.
But for some reason, complete strangers think it's appropriate to walk up to me and inform me that my child needs to see his pediatrician because for a toddler who's a year and a half, he's really behind. And if he were a 18m.o. I probably would be a little concerned.
But he's not, he's half that. And so he's right on the mean, thank you very much.
And then comes the "he'll be an athlete" comments and how we must be proud. I don't get it, because I see no reason in Sasha's gene pool to believe he'll be gifted with athletic prowess.
Unless you count being a Mathlete.
As for pride...well, that's kind of a passive thing to be proud of. My kid grew. In accordance with his personal blueprint. Yeah, that and $5 will get you a latte at Starbucks.
And if he grows like I think, he's not going to stay tall. A history of early puberty makes for some fairly short people in Sasha's family. If he's tall now he'll probably end up average in the end.
TOPIC 2:
"Look at the sheep!"
Every day we pass these parents walking the neighborhood with their little toddler and preschooler. I seriously wonder at how their kids are going to function in the world. Because the "sheep" they love to see walking the neighborhood? Is 100% canis familiaris. Our kerry blue terrier. But they insist on calling her a ruminant and have even offered to feed her grass (which I politely asked them not to do).
No one seems to have the slightest clue this is a dog either. And of course I don't correct them because...I just can't think of a good reason why I don't. I just don't.
It appears there is a profound lack of petting zoos in the world to educate people on what sheep look like or alternatively something VERY WRONG with the Virginia Public School system.
This is a sheep

This is a dog, who may herd sheep. 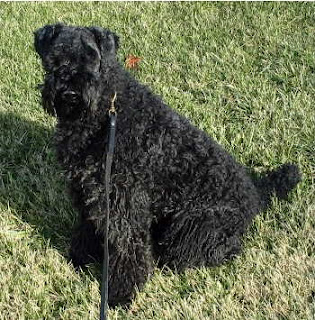 Hmm...that may not have been as illustrative as I'd hoped. But, hey....sheep don't bark. Of that I'm sure.
I suppose I should count my blessings. Previous mis-identifications include:
Bear cub

Both of which caused some hassle from the HOA.

Topic 1: Why do people always feel the need to make comments like that? It's so frustrating. With a tall and relatively slender girl, we get "She's going to be a supermodel!" To which, hubby gives an emphatic "no" and I just shake my head.

Topic 2: Surely, they are joking? The way I joke that my sister's great dane is a pony? is the world really that blind?

we have a big kid too. 23.5 lbs at 8 months, wearing 18 month clothes.
But we don't get any athlete comments.... just questions about food. lol a sheep? oh yeah I totally see the similarity.... wait...