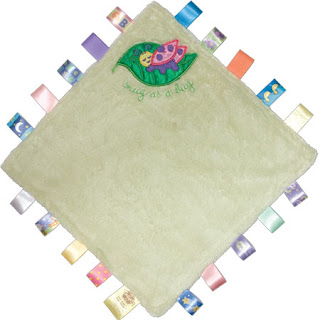 Back to the grind and I'm wiped out.

I need sleep and Hubby and I need to have a date night or something. Sasha has had us worn down for the last week and a half with the teething, or the upset over change, or being sick...

Or last night screaming for over an hour before we figured out it was because Taggie was not in his possession. It was in the washing machine because I needed to get all the snot washed out of it.

So I had to run down and hurridly throw it in the dryer so we could have calmness and sleep.

I knew he liked it, but he hadn't ever seemed THAT attached to it before. We'd been able to put him to sleep without it and do pretty much anything at home without it. It was just when he wasn't home he seemed helped by it.

So I just ordered a carbon copy. And his Grandma said she was going to make one so she could have backups too since she takes him out places. All she needs is to have him leave it in a store and then have a screaming me-me the rest of the day.

It's times like these I wish I could sew.


* Edited to add:
The Taggie has not been all it's cracked up to be. Yes, him having a lovey to help soothe him when I'm not around (and therefore nursing is not an option) is most helpful. However, the reality is that it's just another item on his list of things which must be "just so" to avoid a meltdown. So those who have babies who only can be soothed by nursing? Be glad that it's only the one thing. Not:
-has blankie on chest against left cheek with "applique" corner topmost
-nursing; left side first. NOT right.
-is dry
-has arms positioned for holding just so
And so on.
Posted by Becoming Mommy
Labels: Baby, tantrums

Smart of you to get a back up. At least the taggies are easy to find!

I wish we had something that could calm the Pumpkin down besides my boobs. Ugh!

I so wish we could come up with something that Alexis loves like Sasha and the Taggie. It would make stay in your bed threats far more effective. At least I think it would.

Don't think this existed when Shmoops and Connor were younger. Maybe I could get one for my new niece...

Where do I get one?