It's the Wallpaper Paste of Foods

A lovely, but busy, last weekend at home before vacation.

Mountains of laundry. Efforts to find bathroom fixtures to order that'd suit Hubby's mental picture (so they may be coming in when we return). And the annual pig roast at the in-laws.

The roast was nice, if hot. There was a pool though so it was easy to get cool, and once you were in the shade (for example, under the tents provided) it was about 15 degrees cooler feeling.

I'd brought poi. The taro I'd bought made more than the tiny dish I'd needed to bring to Friday's luau at work. Way more.

Apparently Sasha likes it. He ate several spoonfuls and let me feed it to him before digging in to the bowl with his hands and shoveling it in that way.

It was a weekend of firsts for him.

First time in the pool. He was greatly frustrated by his flotation device or that he needed to be held and could not be free to wander about an adult-sized pool on his own. We can see that a baby pool would be quite a hit for him. 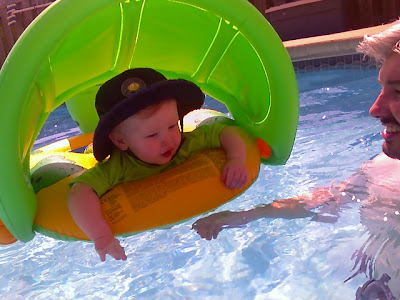 First time wandering around grass freely. He was at first wary of the pokey blades of grass and stayed on the blanket we put out. Then he got over it and went all over the acerage available. Unfortunately, it seems he's a tad allergic to grass (something I should have been able to forsee). Rash all over his legs and hands.

First time in the sandbox he got for his birthday. Yeasty diaper rashes and such kept him from it for a while. But this weekend seemed okay. He liked scooping, spilling, and breaking up the clumps of sand. And he didn't even try eating it.

He's also made up a little dance. Kind of a mashed potato/twist/toe-touch/fullbody seizure that ends in him lifting his right leg up to his head. He'll do it if you play Celebration. Every. Time. It's hysterical, but I'm getting a little tired of the song. He on the other hand, LOOOOVES it!

We got a little time to ourselves. The date didn't quite work out...a leisurely lunch of sushi had to be rethought because the restaurant isn't open for lunch on Sundays. So pizza and a movie, Wanted. It had been getting rave reviews, but I'm not sure why. Methinks it has something to do with gratuitous gunplay and a nekkid Angelina Jolie. Or people being able to suspend reality enough to think that physics will only apply if you believe in it.

Right. Because a rifled gun barrel doesn't figure in. It's all about what's in your head.

I'm getting a little tired of the "Think Positive" movement that was made famous in The Secret. Because? Really? Just cause you want something bad, it doesn't make stuff happen. Visualizing it, doesn't make stuff happen. There are laws and circumstance already in place that may assist or prevent you in you achieving your goal. It's detrimental to push that thought process because it makes every dream dashed, your fault. Ill family not recovering? Infertility? A vocation you felt called to, not fulfilled? In this philosophy, these are all your own fault. And that's just not right.
Posted by Becoming Mommy
Labels: Baby, Cleanliness, Cooking, development, family, food, parties, Philosophizing, Rant, workplace

My little one loved the sand at the beach, and we've been talking about getting her a table or box... how messy is the box?

That floatation thing is awesome! I love the suncover!

As for the Secret, my old therapist wanted me to read it. I read about 5 pages in Walmart, got the gist and didn't buy it. Basically, it's about Karma it seems and your will power. I agree, they only go so far.