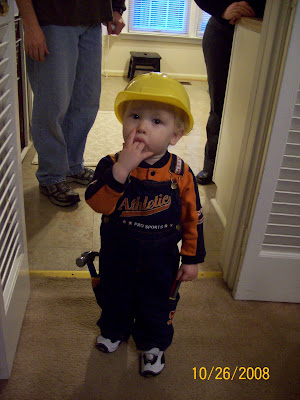 We're in a developmental plateau right now. Probably will be for another two months or so, I suppose.
At least in the kinds of things that are typically thought of as "milestones".
There's a whole other category of learning, and that's where he seems to be.
Mechanics--the child is going to take after his Father and I. He takes everything apart. Everything. And I mean "take apart", not "breaks". Childproofing is more like Child-delaying. And he figures things out far too quickly. We have several puzzles, all of which he likes to take apart and put together, and we try to encourage his curiosity towards those, rather than the lamp or the dishwasher. We may be getting a childs toolbench for him soon so he can spend more time taking things apart and putting them together.
Social--he's learning manners and what's expected of him. He's been getting much better in how he interacts with the dogs (Hound is less afraid and Kerrygirl has less reason to be snappy). He covers his mouth when he sneezes or coughs and will scold others for not covering theirs. We're getting closer to "please" and "thank you" (he says "Ackoo", at any rate). And he's been becoming helpful...at least in his mind (putting clothes away into his dresser--from his dirty hamper). And he knows some of the rules like the dogs aren't to be barking outside...so he'll stick his head out the door and call them in (and oddly, they do). And so on. And we're doing a bit better with the biting--our hypothesis was that our nibbling on him made him think biting was a form of affection. So we stopped...mostly. And so did most of the biting. He's still not that interested in playing with other children, or actually what they're doing at all (other than if they have something he wants) but that's okay. It's age appropriate.
Lifeskills--We've been working on three major lifeskills: pottying, eating, and sleeping. On the pottying front, we've just been working on getting him to tell us when he's going. I figure, if we make him very aware and is used to making us aware potty training next year will be easier. It's been going well and he's been more than willing to tell us all about his bodily functions. Eating has been more difficult. My previously good eater has become picky. But he's been learning how to eat foods outside the "early toddler" range like whole apples and to use silverware (because he hates dirty hands). It's a slow process, but its moving forward despite the glacial pace.
Posted by Becoming Mommy
Labels: development

If you can harness all that taking apart and putting together for good, you'll be scoring a Mr. Fix-It! I could definitely use of those around my house.

Great pic! Love the stories about his development!

It's nice to be in a little plateau, isn't it? Enjoy it while it lasts!

We also used to nibble on the Pumpkin, but when she bit a couple times while nursing, I called a halt to it. I have no idea why she is biting again recently. I'm glad his biting is getting better.

The photo is great.

That's an interesting idea on the potty training front. Perhaps we'll try that.

It's great that Sasha is using silverware. We're starting that with Monkey and he's still a hands-on guy unfortunately. I had to wipe up mash potatoe bombs the other night because he would waive the spoon globbed with potatoes around wildly while grabbing at the bowl of it with his other hand. Ugh. Maybe he can just eat with his hands a little longer ...