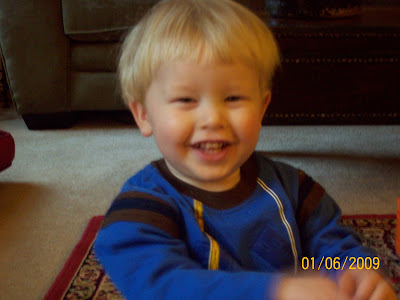 We just spent the morning at the pediatrician. Sasha’s been wheezing for over a week now.
We waited till he had his follow up from his sinus infection because the book said it was nothing to worry about if:

So, I didn’t worry and have pretty much ignored it. But apparently when your child has already a history of frequent respiratory infections and several known allergies before age 2, that changes things. So we’ll be back in 2 weeks.

On the potty front, we’ve had some progress. Last night, after taking his toilet completely apart, putting it together, taking it apart again, throwing it at the dog, going into Time-Out, and then putting it together, he started playing potty. He’d pull down his own trousers (his diaper still on) and sit down. Then he’d get up and “flush” with the fake handle and tell me “all done!” (usually saved for when he’s finished a diaper change).

It looks like I wasn’t too quick to start the training process. He seems to have some clues on what goes on with the potty.

ETA: I know how I mentioned before that Sasha was declared allergy free. Well, I thought that the reasoning we were given didn't make any sense so I sought out a consult for second opinion. Allergist #2 said that 1) you don't do scratch tests on toddlers because a) they don't work on kids that age reliably and b) they don't work well on ANYONE for produce allergies, and 2) in toddlers you do a history and elimination diet (like I did) and if it looks like an allergy it IS an allergy. And Hives are ALWAYS an allergy.
So basically, we now have a diagnosis and a specialist who listens to me.

I hope he gets rid of that wheezing!

I don't think I've seen a pic in a while. He's so big!!! And still adorable. Love the haircut.

And yeah for him knowing what goes on with the potty! That's a great start.