Another "Son of Fire" Comes to Be

Somehow I though the two-ness would be worse. Maybe it will be. But as we approach his second birthday, I expected to wish my child into the cornfield much more often than I do.

Not that it’s all sunshine and rainbows. He does get into some hellatiously grumpy moods. But then I can handle moody. If he’s not feeling particurly social and just wants quiet time to himself “reading” his books, or is wanting to be contrary for contrariness’ sake…well, there’s nothing wrong with that.

After all, I’m Irish. Moody, introverted, grumpy periods are practically the national pasttime (at least, that’s what I’ve gleaned from the Irish half of the family). Even their national dog, a breed of which Kerrygirl is a member, is prone to moodyness and known to walk around the house muttering curses under their breath and for ...er...well, being terribly Irish. I can't explain it. I figure with Sasha we’ll just fight thru whats necessary, and a lot of the rest can be compromised on.

I am all about “whatever works”. Which I think makes it easier. I wasn’t too into “I won’t be the parent who…” Yes, there were a few things. Like I won’t be putting Pepsi in the baby bottle. I plan to at least TRY breastfeeding. Etc. But I wasn’t all deadset on too many specifics. Mostly what I wanted to try and things I thought were good and bad ideas and preferences I had.


For example, Sasha desperately needed either a haircut, or barrettes this weekend. Now like most Moms, I don’t like cutting my little boys hair. I like it’s silky softness, it’s adorable little ducktails,and it doesn’t bother me that when we go out, people insist he’s a girl. But this weekends haircut went awry. I’m used to cutting hair on unwilling, wiggly subjects; after all I’ve groomed dogs. But Sasha ended up looking like he’d cut his OWN hair it was so bad. So I did “whatever works,” and got out my clippers, #40 blade, and 1.25 inch guard and zip, zip, zip, it was fixed. I hate it, but he now looks presentable—cute even. But the baby-look his hair had is gone. As is the feel. It now feels hard and coarse. I suppose I cut the hair that still had “babyness” off. He got his haircut, as that was becoming a true need. But he didn’t have to sit still anymore for it and everything worked out in the end.

Every day, I find I’m missing my baby more and more as little bits of him fall away and are replaced by the boy who’s taking his place. 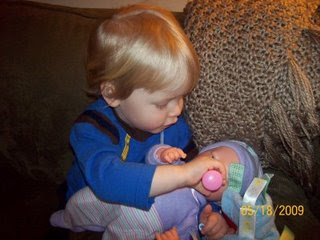 His hair several weeks ago, not as it looks now
Posted by Becoming Mommy
Labels: Baby, development, discipline