The Bad Part of Having Dogs 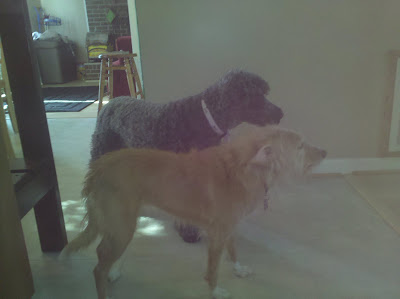 Our kerry blue terrier has been known to get very sick from time to time. However, it's normally the result of some chronic issues stemming, in large part we beleive, from her life before she came to us.
So long as we follow a certain regimen, she'll be fine and be back to normal in a day or two.
This isn't one of those times.
She'd been vomiting on and off for the past week, but had otherwise been giving every sign of a normal, healthy dog.
Then we came home to the nastiness. An apparent HGE attack while we were at work.
I took her to the vet, as I usually do, just to make certain that this was her usual problem. After all, the symptoms are the same ones as a thousand other horribly deadly problems. It's good to know for sure that what I'm already doing is right.
But, her tests did not come back "healthy dog, no reason for illness found." Instead, her organ function indicators were all messed up and in ways that make no sense. So she's sick, we know it's not the usual cause (wound too tightly), and we have no idea whats going on.
So I spent my weekend with medications, fluids and needles trying to get her to be stable and make it thru whatever the heck this is.
Will we ever know? Is she better, or just highly medicated? Hopefully we can tell this evening. When I take her back in.
Posted by Becoming Mommy
Labels: Beasties news

I'm so sorry to hear this! I hope she gets through it okay and it doesn't turn out to be serious.

Ugh. I hope she's OK. Sick pups are no fun, especially since they can't tell us what's going on.