The Terrors of the Fire Swamp 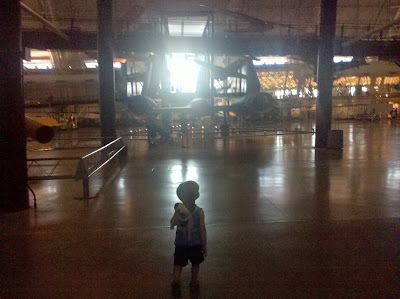 It was a wonderful day on Saturday.
Our plans for Sasha's birthday appeared to be the perfect day for him. He is a boy who likes a quiet, well-ordered world. The only loudness he had to deal with was the "well-ordered" kind which was preceeded by conversation from the Air Traffic Controller describing that the plane would be taking off or landing and announcements from Mission Control to the order of "T-minus 10...9...8..." For him the extreme order that is the Air & Space Center, the quiet, the wide expanse with few people...this allowed for joy. His minor adjustments to the day included eating breakfast in the living room so he could watch cartoons. Certainly requests I could accomodate.
.

But preschoolers generally don't dream big. A little give on some of the rules, and they couldn't be happier.

Sunday was another story.

Sunday was the day of the "big party." Hubby had some discussions about how Sasha does poorly in situations like that, wouldn't eat anything, and how this was generally a waste of time and effort unless the idea was to torture everyone, Sasha in particular. So some changes were to occur.

Chuck E. Cheese was suggested. We stressed "AND NO BIG PARTY, RIGHT?" Just a little pizza, family, and a few turns on the coin operated baby rides and that would be something he could handle. This was agreed.

We went. I was suspicious. Turned out I was right to be.
The party package had been purchased.

Sasha does love a game of Whack-a-Mole and the toddler rides, so we did not leave. However, when the RoUS (Rodent of Unusual Size) made an appearance and the abject terror was evident (He screamed, shoved his taggie so far in his throat he choked himself, and took off to me. whole thing took maybe 5 seconds.) I took him over to the baby section and stayed there for the duration.

We had already explained our child ahead of time. The fact he spent big money is not our problem. The fact that he felt we were ruining *his* enjoyment by not subjecting our child to the torture of perpetual terror speaks more to issues that are his and solely his. We were just trying to make it work by picking a part of the experience Sasha actually did like and respecting the fact he didn't want to go back to the party area.

Children may not be rational, but they aren't stupid. He knew who was enjoying his fear.
Posted by Becoming Mommy
Labels: Baby, disfunction, family, parties

p.s. Love the pic, and the references to The Princess Bride!

Happy Birthday to Sasha! I'm so glad to hear that Saturday went well and he enjoyed himself!

As for Sunday, well you can't fix stupid, right? And it was stupid to spend a lot of money on something that you should know (since being told clearly) that the child won't like. As you well know, it is NOT your problem or Sasha's problem or even your husband's problem. It sounds to me like you guys came up with a good compromise, but that some else was unwilling to compromise. Tough cookies for him!