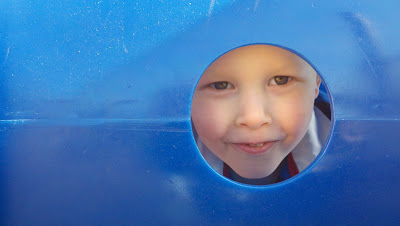 It seems that those who are professional caretakers of children seem to be also be the ones most prone to freaking out over little bits of nothing.

Either that, or I am WAYYYYY too laid back.

We’ve been “spoken to” several times over the last few months by Sasha’s teachers on a number of topics and about his lack of progress in relation to his classmates.

First about the potty training. He was behind and we needed to “do something.”

We didn’t do anything. We actually kind of gave up. He decided on his own to go forwards and use the toilet consistently in very short order. In other words, time made the adjustments necessary and he became potty trained when he was ready.

Then about finger painting. He wouldn’t do it, appeared to have issues with the concept, and we needed to “do something.”

I told the teacher to hand him a brush. Sasha has always had a real problem with anything that feels ‘yucky’ on his hands and so finger painting is a no-go. Handing him a brush not only fixes the problem of him not painting, but is actually what the teachers should be trying to move towards. And? Painting is the one artistic medium right now where his art looks like what he tells you it is. The school finally listened and we have a lovely painting of a rocket ship (complete with nose cone and lightening bolt accent) taking off.

Then about eating. Sasha wouldn’t eat bread and so we needed to “do something” and get him to learn to like it.

Yeah, because that makes sense and seems like a rational request. I did nothing. I urged my husband to do nothing. I continued my methods of having lots of options available and letting him eat or not eat what he wished so long as it was a) enough food, b) a healthy mix, c) what everyone else was eating and not a separate meal. He decided to go along with breads on his own after he discovered the joys of using the bread maker and picking the next flavor of bread himself. He decided to like bread on his own when he was ready.

Now it’s about his drawing. Sasha trembles when using crayons, pencils, etc. and can’t seem to get it to work. We need to “do something.”

I? Plan to do nothing.

Apparently preschool teachers need to read the series by Louise Bates Ames. Sasha is 3 and a half. This is completely normal and expected and part of healthy development for many children. It’s also something I noticed already (hello, I do interact with my child!). He used to be able to draw all the basic geometric shapes (square, circle, triangle, octagon…) but lately it all comes up “snakes.” And when Sasha gets overly frustrated, he quits. He will get it together when he’s ready and on his timetable. I figure around 4 it will clear up on it’s own. We will continue to have fun art projects that encourage him to draw, color, and paint and just wait.

I would be worried if we seemed to have a child who was lapsing in something more significant. Like if he didn’t speak, or couldn’t throw or kick a ball. Something more basic. But it’s these little things and still in the wide realm of ‘normal’. I know that Sasha is just an average kid because all these issues also come with areas he’s ahead. And these too appear to have given them concerns as well so I have to wonder at what exactly is included in the curriculum for someone studying Early Childhood Education.