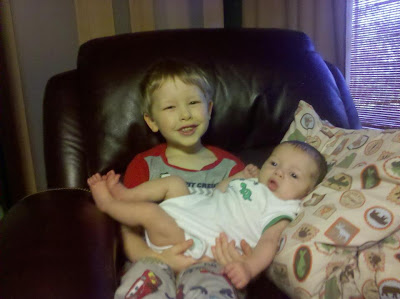 All has been going fairly well.
Brody has no issues. He nurses vigorously and easily. He sleeps through the night. There are no strange symptoms like hives or inconsolable screaming. It appears God deemed that my last pregnancy/birth/babyhood be a happy and pleasant one.
Sasha has adjusted and moved from apathy about his younger sibling to joy and love. Yes, the number of tantrums and such have gone back up, but that's to be expected. It's not been too bad.
Daycare may be making us broke (this one is like a mortgage payment per each child) but it appears to be worthwhile. They've made wonderful progress in Sasha's one true developmental issue--shyness. They've realized that letting him get comfortable first is the way to get him to perform in school. Apparently he's a joy, keeping up well, and even surpassing some of their expectations--notably in the social skills area. He's still not the biggest fan of going to school, but it doesn't result in daily tears and we aren't being told he has learning or developmental disorders. They think he's fine beyond being terribly shy and they seem to know how to deal with that well.
Brody has been there two weeks and we have had all my learned fears about infant care go away. He's not been neglected in any way. He's fed, cuddled, held, interacted with, and cleaned up regularly.
Posted by Becoming Mommy
Labels: Baby, breastfeeding, Daycare, development, education, money, sleep, tantrums