I’m a little drained today, for many reasons.

But not the usual. Sasha slept through the night. I think it was just too hot so that kept him conked out.

For one, it is official today that Sasha is not someone’s big brother just yet. Not that we thought I was pregnant, but I just never felt safe in that I was without regular proof. 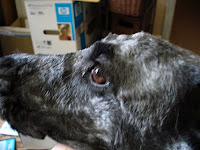 For two, KerryGirl’s health has me in fits again. No, it’s not HGE/IBD again. That, thankfully, seems in remission. She stole a loaf of bread and ate it without any issues but some bad gas. It’s what we thought was a tiny fatty cyst she’s just always had. Recently it had gone from pinhead to noticeable (but still very small) so I had decided to get it removed. We went to her vet yesterday for our regular appointment and they did a quick needle biopsy just to check. On first glance it did look it was just the fatty cyst we believed it to be. Under the microscope though it looked as if it could be cancerous.

She’s having it removed the 22nd. Then it’ll go to a pathologist and we’ll see. We’ve already decided the treatment we’ll do. No chemo or radiation. Her insurance won’t cover anything related to that particular bump, we can’t afford it on our own, and with her poor health we don’t expect she’d thrive under treatment anyway. Our plan is to shore up the rest of her health and make her time with us as comfortable as possible.

For three, Mom is making me insane. She and I are very different people in how we prioritize or think is important. Mom is very concerned with the appearance of things. I, not so much. For example, I know I’m a little overweight right now. I was before I got pregnant and I’m right back to that. However, dieting is not really in the cards for me at this point. I’ve tried to use Weight Watchers and even with the extra points for breastfeeding and such I found my milk drying up and myself fighting chronic dizziness. So, I’m waiting till Sasha is weaned and I’ll go do it again. In the meanwhile, I eat very healthy, whole, organic foods and get lots of exercise. I can be a little chubby for a while longer if it means Sasha gets what he needs. I’ve spoken with my doctors and they agree it’s best to just hold off a few more months and try it again when it won’t stress my body so much. But she is constantly pressuring me to diet and telling me how I’m overweight and such. That’s just mean-spirited.

But I keep reminding myself the ONLY time she didn't think I needed to diet was when I only was eating one meal a day (maybe), purging, and you could see my ribs through my breasts. I keep reminding myself that she compares my sizes to those of my much younger sister or those of herself (as she remembers anyway) when she was 19 or 20. Nevermind I'm in my 30s, have an infant, and am a good bit taller than the both of them (4 inches for Mom, 10 for Sister). I should be bigger and have no business being in the Petites department. My inability to fit in size {anysize}P pants has nothing to do with having a big butt.

She also is insistent about how I need to “get rid” of my dogs because of the danger they pose to Sasha. Well, it looks like she may be getting her wish partially fulfilled in the near future, but she can never give me a good reason why they are a danger. She first insisted that they were an allergy problem. Then studies came out saying a little dander was good for kids and KerryGirl is hypoallergenic and the Hound has only a sparse single-coat. We only have a “little” dander. No weight to that argument. Then she was insistent that they’d probably bite from jealousy when he came home. Just wait, I’d see. But it didn’t happen. Instead, they became protective and helpful. Then she said it’d happen the first time he did something that hurt them…pulled hair, poked nose, etc. But even then, nothing. But she won’t let up. It’s like she’s not happy that I’m making it work so easily because she never bothered to try (she 'got rid' of her dogs shortly after I was born). And so she’s got sour grapes. Plus her concepts of dogs and their behavior is a bit…misinformed? Making things worse. Me, I beleive in adopting the dogs that I took on the responsibility of their care and to give them as good a life as is possible and reasonable. Not only for when it was convenient, but for always. The pups are in my Will.

I think you're on to something. You're Mom isn't letting the dog thing go because she was wrong and doesn't know how to bow out of being wrong gracefully. Thank goodness the pups ended up being good with Sasha!

1. That sucks. That will totally make me tired and cranky.
2. I'm so sorry about KerryGirl's health. Our beagle had a cysts, which we had removed when it started to get bigger. It turned out to be cancerous. Luckily, her bloodwork showed that it hadn't spread at the time the cyst was removed. Now we are in the wait and see mode, and there is not really anything we can do at this point except regularly check her for unusual lumps, which will have to be removed and tested immediately. So I totally understand what you are going through, and you have my utmost sympathy. If you ever want to discuss this further with me, feel free to email.
3. Your mom would also be driving me nuts. Don't listen to her, cause you are right on both counts. Can you tell her kindly to stop mentioning your weight and the dogs? Or just change the subject when she brings up either?

I hope you get more sleep and feel better. :)