Am I Just That Boring?

I've come to the conclusion Sasha is only happy when completely overstimulated. Take this weekend for instance.

Friday, he had both his Daddy and I home. Granted, I needed to work (and did in our office), but I still was there and was able to give some attention. Hubby, his Daddy, is forever hyping him up till he just passes out from exhaustion. He was happy Friday and a good little boy.

Saturday, we had errands to run, the Grocery Man delivered, and Hubby's big brother and his kids stopped by to play with the baby. Sasha couldn't have been a happier better behaved baby. He was just a bundle of Giggles.

By the way, I have changed my mind about Ikea and decided to love it again (though will continue to not order anything there I need by a set date). They have little chairs in the stalls! A baby room you can nurse in or just have quiet time! And they sell babyfood in their cafe! It made life so much simpler to be able to take a lunchbreak and give him some food and fill his sippy cup right there. And then later go take a nurse break (he wanted one) without having to leave to find a quiet appropriate place.
And then Sunday after I came home from church and we'd done some picking up and vacuuming his Daddy left and it was just me, him, and the dogs. I play quieter and more structured than his Dad does. There isn't so all this throwing into the air and stuff. We do songs with hand motions, silly dances, peek-a-boo....the usual. But he was not happy. In fact, he threw a few dozen tantrums. Some you could tell he was just crying because he didn't know what to do with himself. Several happened right after being told "no" and being removed (like his attempt to go downstairs). 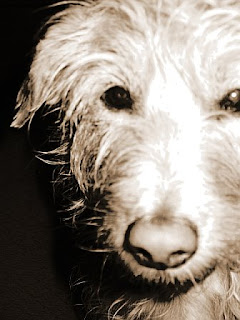 He didn't even have any patience with his bestest bud, the Hound.
On the other hand, he was a little needier this weekend than he has been lately. I think teething must be getting more intense. His nursing has too (and just when I thought I might be done!). He's also been having little bumps and bruises more because he's trying to make that leap from cruising to walking. He gets pulled up, walks to the end of whatever, and rather than lowing himself or calling someone to come help him continue locomotion (as he had been) he's been trying to take those first steps himself.

And wango...smacks right into the floor and whatever else was on the way down.
Posted by Becoming Mommy
Labels: Baby, tantrums, teething

Sounds just like the Pumpkin in just about every way. I assumed that Sunday was a tough day for her because she was worn out by Friday and Saturday. But maybe she was just more bored. Good point.