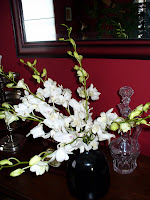 Before I get into anything, here's the gorgeous flowers I got for Valentine's Day.
Also, what I came home to find from the 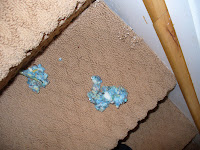 Hound's handiwork. The blue stuff? Our carpet pad. The carpet? Only looks like it's laying nicely. She'd pulled it up to shred what was underneath. Consequently, she also shredded some of the carpet. This is just one little spot. So many Ramen-Noodle looking strings everywhere that were once beautiful carpet. Sometimes I marvel at the fact we haven't sent her to the pound. Good thing she's cute, I suppose. And that we've intended for quite some time to redo our cheapo/superfast flooring jobs with bamboo and 1x1 rough-hewn slate. She just supplies further motivation.
It's coming time to do another purge of stuff. The baby has outgrown almost everything, including his carseat (just about...maybe 1 more month). I've been e-mailing and calling everyone who lent me items to return them or get permission to pass them further along. And consequently a need to get more stuff.
I hate spending money. I swear that I must be the cheapest human being on earth. I KNOW that a carseat is a necessity and that his infant carseat wouldn't last forever. But I was hoping we'd last in it till he was old enough for the 3-in-1s. But no. Here he is only 8 months old and within 1 lb of the weight limit on his carseat. And apparently rear-facing is necessary for 1 full year.
Ugh!
So I've been looking around for *good* carseats for big babies and unless I want to have my parents to get a hernia putting a 22lb carseat in and out of their car, it looks like Britax is the way we need to go.
A $300 carseat. Unfreakin' beleivable.
And we either need to have several OR haul it in and out of the car every single time. I have no idea what to do. I'm willing to do what it takes though to keep that little cutie safe. And warm. That overall in the photo? 9 months. And guess what? You can't snap it anymore. Or most of his pants/onesies. So I need to haul out the 12 & 18 month stuff we got for returning a bunch of his Christmas gifts that never fit. 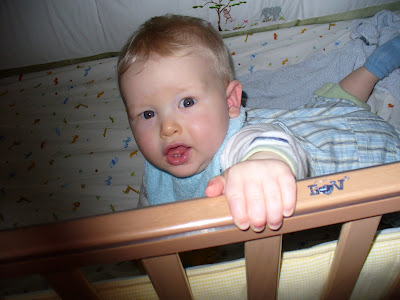 Allow me to share a nugget of wisdom with you. You can get the Britax Marathon for $229 w/ free shipping and no sales tax at this place. I have bought three from there (our own and two for gifts).

They really do grow much too fast!

We got our Britax(es) on sales, and that was so helpful. We got two of the Marathons, which made sense for us with our tall baby.

Beautiful flowers! Boo on the carpet!! Gorgeous pic of Sasha!