SAHD will not be coming soon 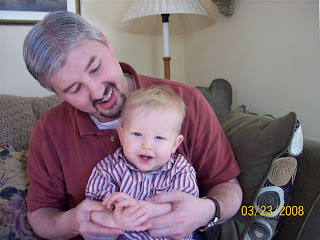 It was a lovely weekend. I had to work late on Friday because I had to finish a class for required professional development before I timed out and failed by default--which would have happened today. But I got in just under the wire and did fine.

Saturday we met for brunch with the in-laws. It was a bit of a mess up because everyone was late as usual. Partially because they had gone to the wrong IHOP. Others because they didn't leave the house till it was already a half hour past when we were supposed to meet. Sasha was good and we just fed him while we waited for everyone else to mosey on in. He passed out for his morning nap when one of his Uncles decided he wanted to hold him for a bit and therefore was stuck holding him when the food came out. Heh, heh.

I bumped into some old co-workers from my last job while we were there. They were a little surprised to see me with the Mom haircut and a passed out munchkin, but that's how things go.

Yesterday just had Easter lunch after Church with my family and that was it. Very low key weekend for a holiday.

And take care of Kerrygirl who didn't seem to be feeling too well. I am positive Hubby left something out she got into. After all, he seems incapable of putting half eaten food away.
I'm rethinking our plan to have me make enough money for him to be a SAHD. Every day he was at the end of his tether by the time I got home. And nothing was done in the house. Not even so much as him putting food away after he made himself lunch so I had to throw out a ton of stuff that was just sitting out spoiling.

I dunno what we are going to do because in his field, there really aren't any options for him to make the kind of money to support a family. I've crunched the numbers every which way and no matter how much we economized we'd still be short. Even if we didn't have dogs. I was the only one who could make enough but I'm also the only one who seems to be able to cope with the workload of being a SAHParent.

I know women are better multitaskers and that's probably part of it. I also don't suffer from that form of narcolepsy fathers seem afflicted with. And since I'm not sleeping on the nursery floor, I can get laundry done, dinner fixed, errands run (via PC), and be on a telecon for work planning out some big project at the same time.

I think Sasha may have to have 2 working parents because I can't come home every night to the disaster zone I was met with last week. I can't do all the SAHParents work, plus work all day, plus handle the costs of the spoiled food, E-vet visits, and so on that happened last week with our SAHD experiment.
Posted by Becoming Mommy
Labels: Holidays, hubby makes me crazy, workplace

I totally relate. My dear hubby is the same way. I just don't think they can help it. That's been really eye opening to me lately - realizing that it's lazy for me to act like that because I can do more, but for him, multi-tasking is not even possible, so how can I be mad at him. It'd be like getting mad at my son for making a mess in his diaper. :)

Do you think he'd get better over time, with more practice? That sucks that he didn't even put the food away! It's amazing to me that guys just don't even think of things that are so obvious to us.

And did I miss something? What happened to the great daycare you found?