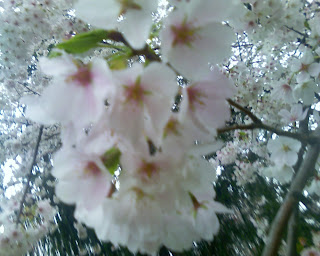 I grew up a military brat. We moved around a lot. Sometimes back and forth to the same places. However, we moved for the most part in military circles so even if you came back...nothing was the same. I'd gotten used to the idea that you could reinvent yourself every couple of years because those people? Who made up your community? You'd never see them again.

I now live in the same metro area as I went to college in. But, true to habit, every few years I'd move. I'd change employers. I'd find myself with a new group of friends. But always within a 100 miles of each other.

I continued my spot-changing ways, but in the past few weeks I've learned that I'm now a leopard. Not a chameleon. To be a chameleon, I'd have had to move out of the area and change the type of industry I worked in. Because those people? They were doing the same thing I was.

In the past 2-3 weeks I've been crossing paths with people who I thought were gone.

The first was Easter Weekend. We were at IHOP with the in-laws when I heard behind me, someone calling my name. I turned, and it was someone who worked with me in Travelling. It caught another tables attention, and they too, were someone who'd worked with me in Travelling. And again. Till there were 5 people, all from that job. All noticing that the Twilight Zone had sucked us in to the giant vortex that is IHOP and we were all basically sitting together. By sheer coincidence.

The second was in a recent meeting and I KNEW I remembered the financial person from somewhere. KNEW IT!!! And finally it dawned on me. She was a former roommates girlfriend. She was at my house more than I was. It's no wonder I recognized her.

And today got an e-mail from a vender rep who turns out to be a friend I just kind of lost touch with long ago. We carpooled, shared recipes, went shopping...I went to her eldest's naming ceremony and she went to my wedding.

No one I've bumped into has been someone I never wanted to see again.

So, so far this has actually been quite a pleasant experience. But I know if I'm bumping into these so much now...It's only a matter of time before the unpleasant ones start. The ones for whom my restraining orders have lapsed.

Hopefully they are true chameleons and have long since departed. Never to be seen again.

I want my hometown to be full of people who bumping into is a joy.

Thanks for the recipe help. I'm heading over to your site as soon as I'm done here.

And the taggie blanket? I can't een sew a button on a shirt so guess I will hunt one down on the internet!

It really is a small world, isn't it?