The birthday party went off all-right I suppose. Unfortunately, it was not expressed to us there was a dress code. So we came in our church clothes. It was coat and tie.
I used to work in a home for the elderly and have never heard such ridiculousness as requireing coat and tie in the normal dining area.
Fortunately my parents brought spares for Hubby and I had a suit and pumps that needed to go to the cleaners (but wasn't too bad) in the car. Extra fortunate for me having the spare clothes because "leakage" which hasn't been seen in months suddenly reappeared.
And a home for the elderly is just not a good place for toddler. Sasha and his cousin were not too happy and both us Moms had to go let our kids run around in an empty room to keep them from having meltdowns.
Sasha has learned a new word. Nanna (banana). Unfortunately he doesn't quite have the definition down and thinks ALL fingerfoods are banana. And he's becoming increasingly independent on the feeding front so has now decided he doesn't want oatmeal anymore. Or yogurt. The few foods we really HAVE to feed him.
We've had a lot of yelling of "NO! NANNA! NANNA! NOOOOOOOOOOOO!!!!!
Unfortunately, we are still working on what breakfast food he will eat now.
Apparently he's not a fan of breads. I tried pancakes and covered them with yogurt and fruit and cut them up.
He ate all the fruit (with many happily said "nanna"s and giggling) then sucked off the yogurt and handed me all the pieces of pancake. Yes, goopy sucked on pancake. Yum.
I know all too well when babies do that they REALLY don't like it. We also tried bread. Nope. We tried more lunch/dinner type foods. Nope.
He also doesn't like "sweetened" sugary items. He got a fistful of cake at the birthday and that got handed to me too.
What are we gonna do for birthday cake now? 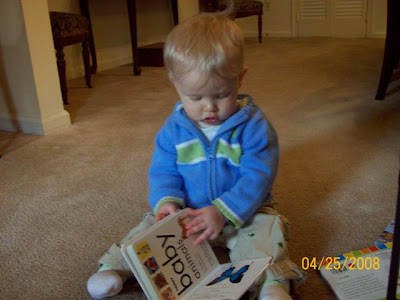 I've got a good recipe for a low-sugar cake. I made cupcakes, and it was like muffins, but the toddlers liked them. Let me know if you want it.

This weekend, I thought I was brilliant for making blueberry pancakes. The Pumpkin picked out the blueberries and left most of the pancake. Oh, but she loves freshed baked bread, so I've been baking. But mostly, it's fruits and veggies for her. What are ya gonna do?