I was inspired by one of Burgh Baby’s recent posts to write about this.

You see, I am an Animal Person. I don’t just mean that I think puppies and kittens are cute. I mean I could almost become one of those people who has a number of animals that most people find to be a sign of mental illness.

It all started when I was little. I had a tendancy to bring wild animals into the house. Once, as a little girl, maybe all of 5, I was luring a giant jackrabbit into my Grandparents’ house with a piece of lettuce—quite effectively, too—when I was caught and the rabbit scared off.

From then on it was all the time: hermit crabs, iguanas, parrots…I even fed a few satos my parents didn’t quite know about. Dogs followed me home. Abandoned baby birds found a home with me.

I was one of those kids.

And we do have 2, so I’m not far off. The Hound is pretty much Hubby’s, and Kerry is mine.

And I’m turning the Hubby into an animal person as well. I can see it.

He mentions wanting a certain kind of dog, lizard, etc. And how we need to get acerage for his animal owning dreams. Yes, I'm aware this dog looks a LOT like the Hound. And it should. It's the large size of the same breed. And it's what he wants eventually

.I, too, have animal owning dreams…ones that require acreage. I want more or less a small-scale farm. With very specific animals… 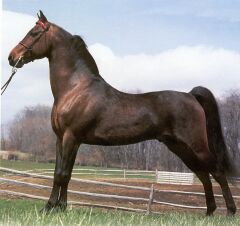 And so forth….
Posted by Becoming Mommy
Labels: Nada mucho

I love Morgans. Great choice. Of course this is from one of those people with so many animals it's like a mental illness.

No, you don't have that many animals. At least, I don't think so. You seem to not be a "collector".

You're a breeder. One day maybe I will too. But I want a dog who welps easy. I'm thinking Hubby's podengo dreams may be the right path there.

But have a dozen or so puppy carbon copies of the Hound? God help us....

Okay, you let me know when you have the small farm, cause I'm coming over to pet and play with them all. For that matter, I want to go up and visit Karen's menagerie.

I would love to have all those animals, but the work involved scares me.

I'll have to write up a post about my animal history. Londo calls me Ellie Mae (from Beverly Hill Billies).

You and my husband are kindred spirits. When I see all those animals? I think about all the work they require. I'm such a bore.