Sasha voted with his Grandma and he apparently put in his two cents for Nader. Not too bad...maybe my kid has more logic than we give him credit for.

I am so over a two-party system.

I was shocked to find my polling place a complete ghost town. No one standing outside with propaganda. No one waiting in line. And nary a car in the parking lot.

I thought something was wrong. But no, just no one was voting apparently.

Odd considering just the night before my neighborhood was crammed with almost 100,000 people because of the Obama rally. And the way the Obama super-fans acted? Did not leave me with a good taste in my mouth. 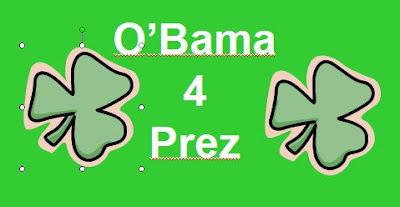 Granted, I know that this one's from the neighborhood. I see that sign several times a day sitting out in a front lawn. I just had to wonder if they knew who Obama was. If not, the rally should have been a bit of a surprise.

So, how do I feel about the outcome?

I dunno. I'm reserving judgement. We need to see what the outcomes of his 4 years are and how they'll affect us in the long term. Only time will tell. I'm hoping he's the right person. If not, well, we should be used to what that means for us by now.

Sorry about the mess of a rally. That's too bad. Glad there wasn't a wait at your polling though.

Eww on the public bathrooms in people's lawns. Though, of course, that's not Obama's fault, it is unfortunate.

Wow that rally sounded completely different from the one I attended earlier this month. That's a shame. Doesn't give the new president a good name. Although, it does remind me of the recent South Park episode. Did you see it? Pretty funny.