Civil Disobediance IS a Developmental Milestone 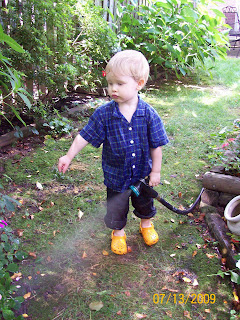 Apparently Sasha takes after his Mom in how his Twoness comes out. He is the king of passive aggressive.
He’s been in swim classes. He has completely refused to participate in any way and does anything he can to do the *opposite* of what is asked.
And like Mommy at his age, these activities he’s refusing are ones he LOVES! They teach with song and accompanying motion (Imagine a whole class based on ‘The Wheels on the Bus’). He should be ecstatic, but instead he’s Two.
I still see it as a win. Hubby is learning the songs and methods. We have access to a pool. Sasha will apparently participate in *that* pool. So he’s learning the same thing regardless.
He’s decided he can tell me no. Um, not likely.
We’ve finally converted his crib to a toddler bed. This has brought about fear, with a capital F. Not sure why. It’s the same bed, we just took off a side and put on a smaller rail to keep him from rolling out (it is even the same finish and style). But he doesn’t flip out if we stay in the room with him while he dozes off. I’m slowly moving further and further away and leaving when he’s less and less asleep so we can wean him off.
He’s also begun singing! Finally! Not all the words, but he’s gone from prompting me if I get distracted and stop to singing along with the words he knows.
We’re also having another little burst of learning and he’s pulling out new sentences left and right (yesterday, it was “I spray you” and “It’s stuck”). Now it’s only taking one telling for him to make a connection so I think it’s more a function of learning how to form the mouth to make the sounds than what the actual words mean. I’m also getting “Please” (or rather, “peez”) now if I tell him “no” or ignore him. So, we’re getting somewhere.
Eating is also going okay. He can use a fork if the food isn’t too crunchy. Spoon is a total loss. Food everywhere.
Posted by Becoming Mommy
Labels: Baby, development, discipline, talking

My kid loathes group sing-a-longs of any kind. He will sing by himself, but absolutely will NOT sing with anybody else. In fact, if you try to sing with him he'll be like, "No, Mommy. No sing." Whatever.