Good Intentions, not fully thought through

Occasionally, you get the idea for a really good gift. Something a little different.
I thought of getting the munchkin stuffed animal versions of his dogs.

After all, he loves them. He would like to have them around him at all times. However, the idea of the Hound coming to the grocery store is a bad idea from so many angles it could make your head explode. Being 2, though, Sasha doesn't fully appreciate that.

And then I came upon the reality of it. And wished I was a "lab person" like everyone else.

The truth is, they are too rare for people to bother making plush versions. For the most part.
I did finally find a kerry. As for the other? I've found passable dingos and chihuahuas. Hopefully he understands what I'm going for. 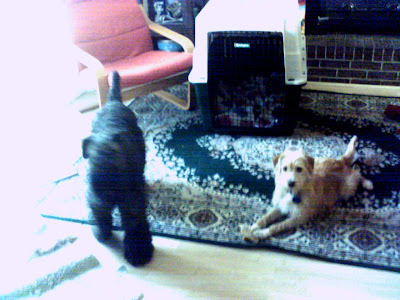