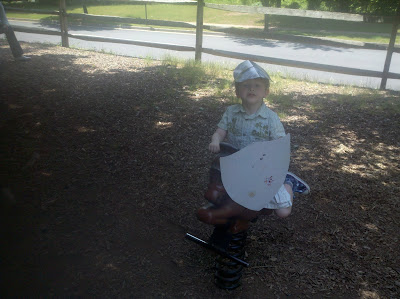 The park space we got was lovely, well shaded, right at the parking lot (so easy to unload to and find), and right at the playground for the kids. The weather cooperated. No kids had meltdowns, accidents, or any minor emergencies. And Sasha had a ball, as did his little friends (Facebook was covered with photos of happily passed out kids in carseats who’d just left his party). Even my theme ideas worked out well and the Sword in the Stone cake looked perfect (thank God for an idea that gets better, the worse you are at cake decorating).

It was just about the most perfect day we could have hoped for.

The main problem was right before the party. My parents started a fight in a public park.

If you rent party space in a public park, there’s always the chance you’ll have squatters hoping to be able to get the place free and without a permit. However, the city has ways of dealing with that. First off, you can just call them and often get the group a list of other places in the park that aren’t reserved so they can move there (what we did, they got the poolhouse and were very happy). You can also decide to be adults about it and they can move off on their own when faced with the fact you have the paperwork. Or, finally, the police will remove them if they won’t go on their own.

Unfortunately, my folks got there early, didn’t wait for me to get there, and just confronted the squatters demanding they leave immediately. Or else. Lovely, isn’t it? When you have to break up a fight your folks started? Oh, wait…yours wouldn’t do that? They have more couth? How nice for you.

There was also the hissy fit begun by the grandparents about the way I’d decided to run the gifts. We put them in the car and Sasha unwrapped them at home. I think it’s what kept everything running without a single tantrum. Every other little kid party I have been to is filled with tantrums, hitting, etc and most of it at the present opening time. I decided we’d skip that and let them hit each other with balloon swords while running around the playground instead. Grandparents unfortunately did not see my wisdom and instead pulled attitude because they didn’t get to see the opening of gifts.

Now if only I had tricks to get the older contingent to behave.
Posted by Becoming Mommy
Labels: bad parenting, Birthdays, discipline, disfunction, family, friends, parties

Kudos for having a wonderful party! Sounds like all the kids enjoyed it, and that's what matters of course.

As for the "big kids"... Man it's always something with the grown ups, isn't it? Sorry about your parents. And the grandparents just don't get that this is the norm these days. We have the parties at our house so far, and my parents stay until after the party when we open presents or go home with my sister's or brother's family for the gift opening after their parties outside their houses. Kids' parties ALWAYS go better when you don't do the opening around all the other kids. And too bad for the adults who don't like it!